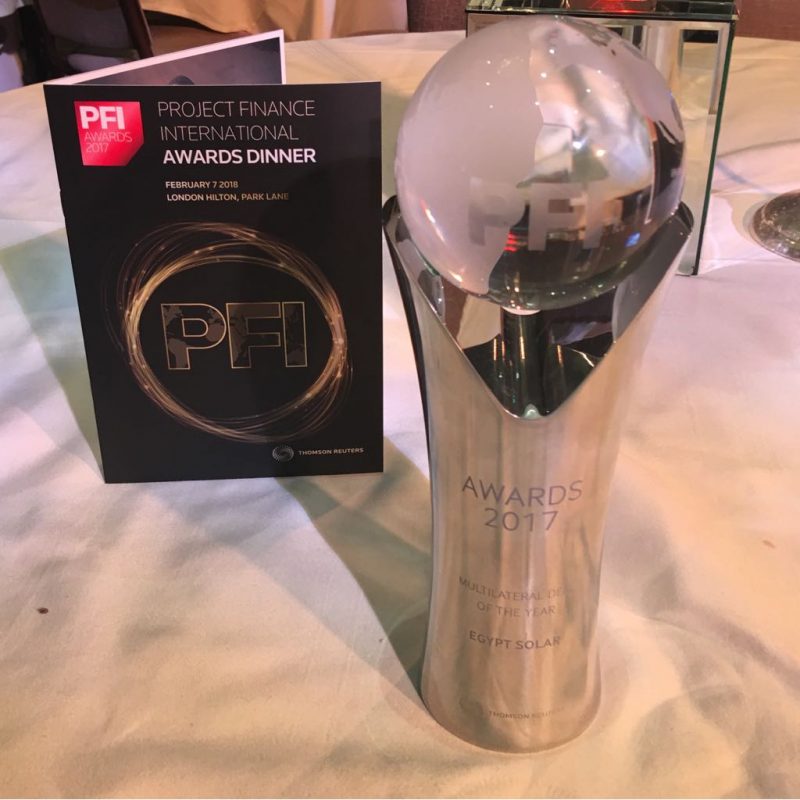 Transmission Company (EETC)  on the second round of the Feed-in-Tariff Solar Program in Benban, which received the Thomson Reuters Project Finance International Award for “Global Multilateral Deal of the Year” in a ceremony held in London on the evening of Wednesday, February 7th.

The Program has been praised by Thomson Reuters for its major success after securing financial closure for 30 solar projects having an aggregate installed capacity of over 1600 Mw.

The Program is considered both an Egyptian and an international success story.

For Egypt, the Program launches the first successful major solar park in the country, reviving hope in sustainable and renewable energy future, and with over 2.2 Billion USD of financing, the Program is considered the largest Foreign Direct Investment in Egypt in recent years.

Internationally, the Program promises to be the largest solar park in the world upon construction, making it a landmark in the global fight against climate change.

Zulficar & Partners Law Firm was invested in the Program with EETC shortly after its inception and was engaged in its different phases. Zulficar & Partners’ contribution helped restore faith in the Program during the sensitive time following the disappointment brought by the loss of financing of the first round, and has ensured the successful completion of negotiations with the International Financial Institutions providing project finance and the timely financial closure of the second round.

The Program owes its success to both EETC and the international financing institutions, particularly, the International Finance Corporation (IFC) and the European Bank for Reconstruction and Development (EBRD), whose active engagement and great interest in the Program immensely helped the negotiation for the second round to close successfully.

The Global Award for Multilateral Deal of the Year is a prestigious award granted by Thomson Reuters to the most remarkable project finance transactions, and therefore crowns the success of the Program and its participants.

Zulficar & Partners Law Firm continues to support public and private entities in their efforts to invest in green energy and sustainable development, which constitute one of its core values as an Egyptian law firm and a responsible citizen.

The following is the announcement made by Project Finance International of Thomson Reuters:

The Egyptian solar project programme went from being a significant let-down to being a major success in the matter of months. Of course, the turnaround did not happen overnight. The seeds were being sown as round one of the programme was coming to an undignified end, with round two, this year’s success, moving to centre stage.

The European Bank for Reconstruction & Development (EBRD and the International Finance Corporation (IFC) win the Global Award for Multilateral Deal of the Year jointly for their work on the programme. In all, they financed 29 separate 50MW solar pV projects, with EBRD banking 16 and the IFC, 13. Special mentioned should go French multilateral Proparco, which played an important role in turning round one into round two.

The three, along with the government and its advisers, worked on ensuring a bankable structure for round two while at the same time seeing a big reduction in tariffs from round one to round two. International arbitration was allowed in round two and the work on the Ministry of Finance guarantee had been completed. But at the same time the feed-in tariff (FiT) was reduced by 40% from round one to round two. One scheme has been built under round one, 32 are being built in round two.

The Egyptian team was headed by Eng Lamya Youssef Abdel Hakim, sector head of private projects and head of the Central Unit of FiT projects at the Egyptian Electricity Transmission Company (EETC). The government team was advised by Zulficar & Partners Law Firm. The EBRD was advised by Clifford Chance, Allen & Overy, and Shearman & Sterling, while the IFC was advised by Norton Rose Fulbright, and Sharkawy & Sarhan.

The two multilaterals adopted differing approaches to their financings. The EBRD financed its schemes in portfolios linked to their sponsors. The IFC put its whole financing together in one package and then sold down individual tranches. The result was similar, with both adopting the same terms and conditions. The EBRD and IFC arranged the hedging on the debt.

In all, circa US$2bn was raised to invest in the local economy and to provide 1.4GW of carbon free power. This was done just after the Egyptian pound was sharply devalued at a time when domestic economy confidence was just recovering. The round two programme provided a highly structured, heavily negotiated but lower-cost project finance solution to more than 30 small projects in one go.

The collaboration between projects and funders in the programme was on a number of levels – debt finance, legal, technical, solar irradiation studies, and so on. Egypt, having got a taste for solar, is expected to keep offering market opportunities into 2018.”